We are pleased to announce The Art Channel for Apple’s new Apple TV. We hinted at this announcement last week in our blog post “The Future is next week.” Well, the future is now.

Art Channel, which can be downloaded for free from the new Apple TV app store, will present shows utilizing Art Authority’s database of over 100,000 paintings and sculptures by 1500 western artists. The first Art Channel show is, literally, The Best Ever, a hand-selected set of top paintings from the past 600 years. These all-time classics on an HDTV hanging on your wall literally have to be seen to be believed. A picture is worth way more than a thousand words in this case, but here are a couple anyway: 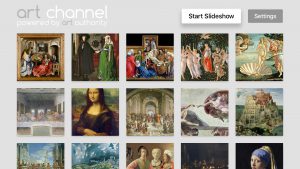 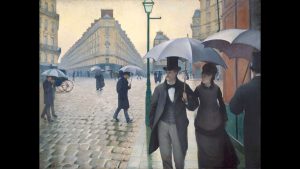 Apple says the future of TV is apps. We certainly agree. One of the great things about the Art Channel being an app is that, not only will we be adding shows to it in the future, but we’ll also be adding features. So look for some of the technologies pioneered by the Art Authority apps, like Art Real Size and Art Like This, to be available through the Art Channel as well.

Speaking of the future, the current one was not only envisioned long ago by Back to the Future, the movie, but also by us here at Open Door Networks (Art Authority’s parent company). In 2004 we shipped an application (they weren’t called “apps” back then) for the Macintosh that let the Mac display, among other things, full-screen works of art. And we specifically suggested hanging one of Apple’s new-fangled flat-screen iMacs on your wall for the best experience. The name of that Macintosh application? Envision.