A quarter century of Open Doors

You likely now know us as Art Authority, but we got our start 25 years ago today as Open Door Networks, Inc. On January 4, 1995, Open Door’s founder, Alan Oppenheimer, left Apple Computer and Silicon Valley to move to Ashland Oregon and start a company to help Macintosh users experience a new communications and information system, “the Internet.” Alan had helped build the original Mac’s similar system (“AppleTalk”) and hoped he could bring that system’s user-focus, ease-of-use and security to Mac users as they joined the fledgling Internet.

The new company, and its AppleTalk-based Internet access system, was announced at Macworld in San Francisco on that day in 1995. It’s been a long, strange, 25-year trip since then. Not only was the Internet just getting started, but a new publishing and e-commerce system called the world wide web was just being rolled out as well. Open Door helped Mac users, and Apple itself, not just surf the Internet and Web, but also publish on it by turning the Macintosh into a world-class Web server. A series of server utilities followed (WebDoor, HomeDoor, LogDoor and MailDoor). Open Door also hosted a number of the earliest web sites.

Reading the handwriting written large and bold on the world wide web wall, Open Door worked with Apple on utilities to help Mac users migrate from AppleTalk-based networks to ones using Internet (IP) protocols. The next sign post was pretty clear too, reading “Be safe out there.” Thanks to its initial design, the Mac was already the most secure way to access the Internet, but Open Door’s DoorStop Personal Firewall helped further secure Macs against an ever-growing variety of international Internet evil-doers. DoorStop, licensed by Internet security company Symantec, became the basis of a suite of Macintosh Internet security products, including the book “Internet Security for Your Macintosh.”

Meanwhile, back in our home town of Ashland, Oregon, Open Door helped the city plan and roll out a city-wide fiber-optic network, and we used that network to provide free, wireless Internet access at the local Starbucks, perhaps the first Starbucks anywhere to provide that now-omnipresent service. We also used the network for one of the first-ever July 4 parade webcasts.

In early 2004, Alan and Open Door were asked to present a keynote talk, “A History of Macintosh Networking” at the Mac’s 20th anniversary celebration. The presentation was again at Macworld, where the company had been introduced nine years before.

In 2007, Steve Jobs introduced the iPhone, the biggest change to computing (and society in general) since the personal computer. It was immediately clear that Open Door had a role to play with that world-changing device, but it wasn’t clear what that role was. We had an app available day one of the App Store (iEnvision), and would introduce over 100 apps within the first year. But by the time of Apple’s next game-changer, the iPad in 2010, it was clear that our classic-art viewing app was the big winner.

We just didn’t know how big! Available again on day one, Art Authority for iPad would be featured by Apple many times, and win the Apple Rewind award as best reference app two years in a row. The educational version, Art Authority K-12, would be highlighted by Apple VP Phil Schiller in a keynote at the Guggenheim Museum, and iPhone and Mac versions would follow, along with a curated version for the Apple TV, Art Channel. The Art Authority database would grow to over 100,000 works of art from nearly 1000 museums. 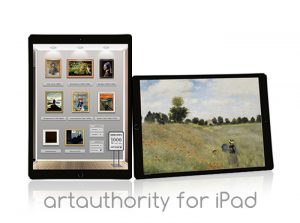 We were pleased and honored by the difference we were able to make at this new intersection of art and technology. Things got even more interesting when the real art authorities found us. We ended up changing the name of the company to Art Authority LLC, acquiring the pioneering fine art retailer 1000Museums, and making major contributions to the art world in which we are now so firmly entrenched. Our museum-approved archival reproductions are second to none, and we’ve given back hundreds of thousands of dollars directly to the art world in the form of royalties. We’ve also sponsored an internship program for nine years running.

From dial-up Internet to fine art reproduction over a quarter century. Quite the ride. We can’t wait to find out what the next quarter century will bring!