Real art in the real world

Perhaps one of our most meaningful experiences at Macworld/iWorld wasn’t even at the show itself. It was at the de Young museum in Golden Gate Park, where we were treated to the “Girl with a Pearl Earring: Dutch Paintings from the Maurithuis” exhibit. It was literally an eye-opening experience.

As much as we love our Art Authority line of apps, and as much as we love Apple’s amazing iPad in particular, no app on any device can completely do justice to real art in the real world. “It’s just not the same!” You hear that about any recorded/digitized media versus the original, and it’s certainly true when it comes to fine art.

Yes, we had to fight crowds to get in, especially in the parking garage of all places. And, yes, we had to jostle with a few patrons to get up close to the quintessential “Girl.” And, yes, we couldn’t even get as close as we wanted due to a security railing (although we could with the other classic works in the exhibit). Avoiding these concerns are all certainly reasons to turn to Art Authority, as are the 60,000 works that it currently gives you immediate, no-travel-required crowd-free access to.

But the differences between viewing Vermeer’s “Girl” on an iPad (yes, even one with a retina display and brightness turned up high) and viewing her in real life are pretty startling. Here’s an image with the Art Authority version on the left and certain key areas of that image highlighted on the right (view full screen for best effect): 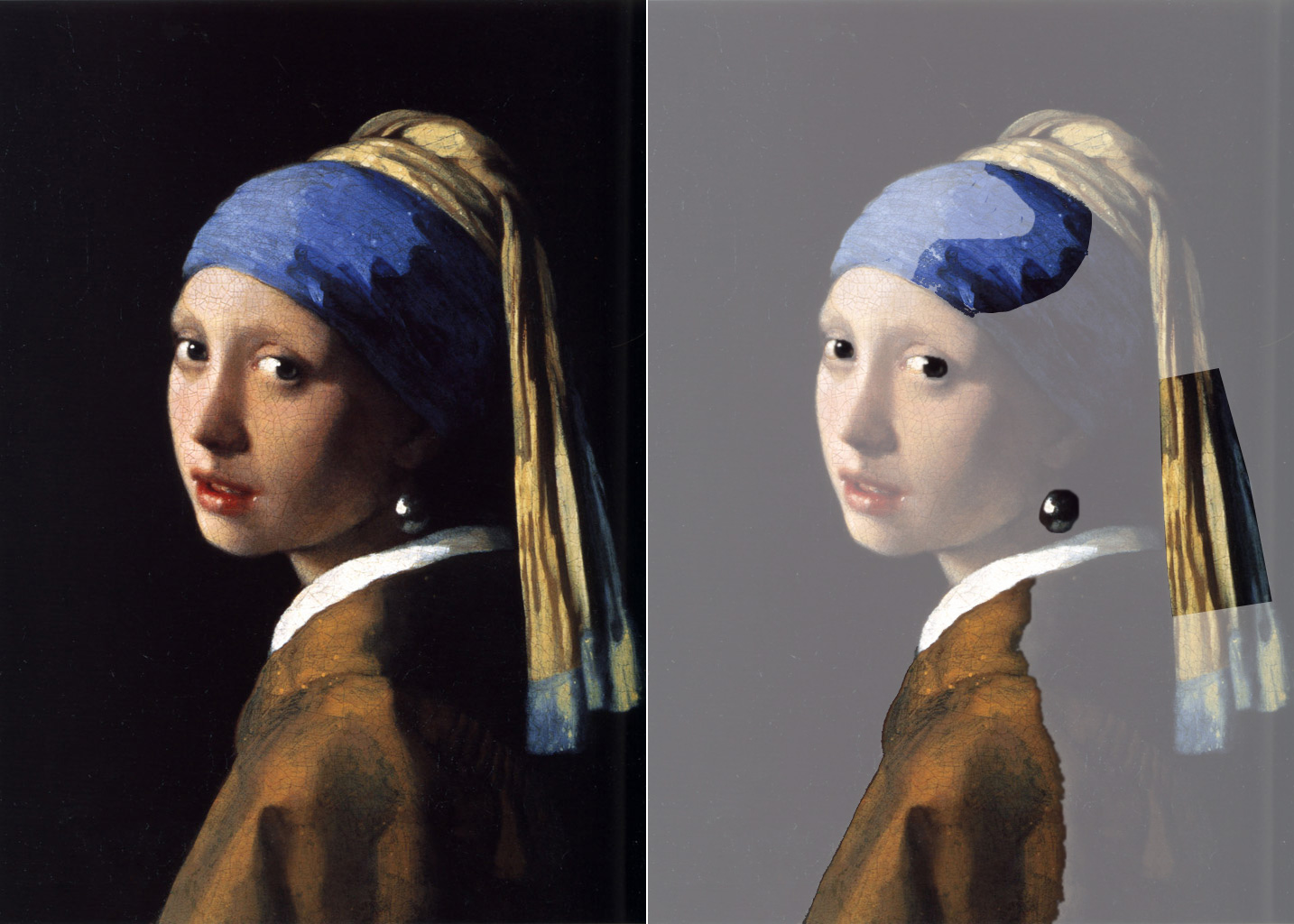 First off were subtle color differences. In particular the lit part of her jacket. There’s a subtle tint of green in the actual painting that isn’t conveyed by the version in Art Authority on the iPad (or other devices for that matter). In theory careful color correction might be able to address this deficiency, but it might well introduce other errors.

More significantly, the brightness and contrast of parts of the work went well beyond the way it looked on the iPad. The “terminator” between the light and dark blues in her headpiece, and within the folds of her scarf were much better defined. That pearl earring stood out much more clearly against the dark background, making the little spot of light reflecting off it slightly less noticeable but much more realistic. Conversely, the light reflecting off her irises, and even the tip of her nose, was made more realistic by being more distinct in real life than on the iPad.

Not too surpisingly, the same effects applied to many of the other works in the exhibit. In particular, the large Steen work entitled, alternately, either “The Artist’s Family” (in Art Authority) or “As the Old Sing, So Twitter the Young” (in the exhibit; we’re researching the discrepency) showed way more contrast in real life than on the iPad. The challenge there was standing back far enough to take it all in at once without someone being in the way.