Art Authority’s president, Alan Oppenheimer, and his wife Priscilla just got back from a trip to the San Francisco Bay Area. Combining business with pleasure, they presented the company’s wares at the Pitch 2013 startup show at AT&T Park, met with the foremost authority on Jan Brueghel the Elder at Berkeley, met with representatives of the Fine Arts Museums of San Francisco about the National Docent Symposium they’re hosting next month (more on that later), and saw the Diebenkorn and “Impressionists on the Water” exhibits at the de Young Museum and the Legion of Honor respectively.

They also had a real life dinner with two of the participants in this year’s Summer Intern Program. We pride ourselves in the worldwide reach of our apps and our programs. The Art Authority database includes works from nearly a thousand museums and other art sites, our Art Authority apps bring that art to users around the world, our Art Alert app helps bring users around the world to that art. And our intern program this year included interns from as far east as the United Kingdom and as far west as New Zealand. We feel great about the difference we’re making worldwide. But every so often it’s really nice to just be able to sit down with people in real life and have dinner! 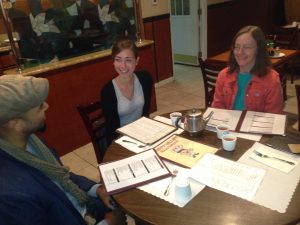